The Blue Laser and Its Applications in Industry and Science 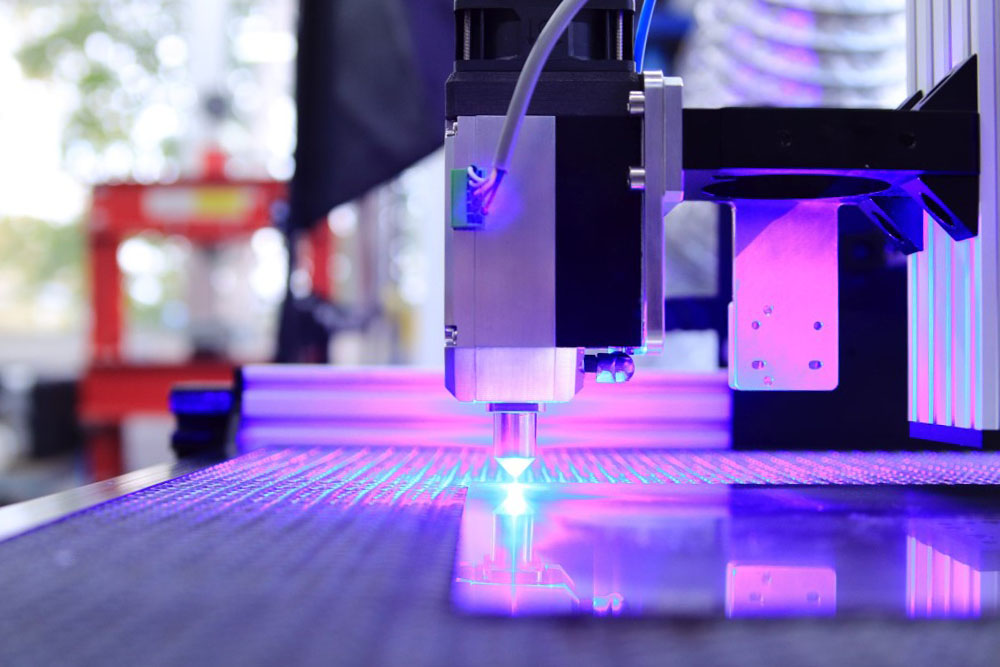 What is a Blue Laser?


The blue laser is a device that emits a light beam in the wavelength range between 400 nm and 500 nm, visible as violet or blue to human eye. The light beam produced is temporally coherent and can be well-collimated, which allows it to have numerous applications in industry and science. Characteristics of different blue lasers are predominantly determined by different gain media and their properties. The term blue laser can refer to either one of the following: 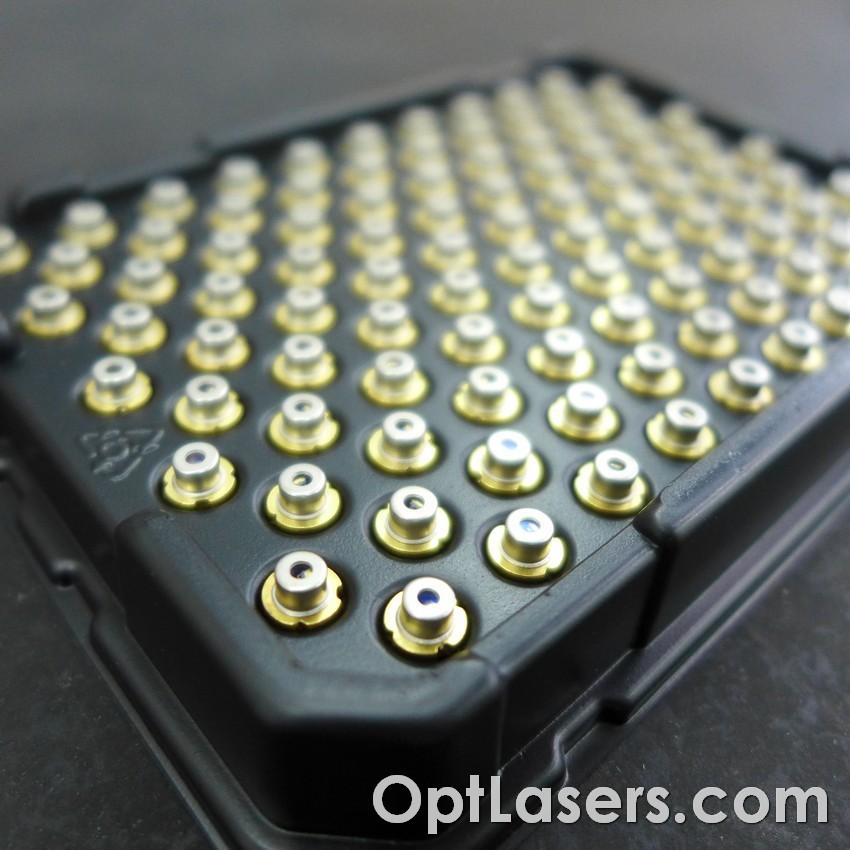 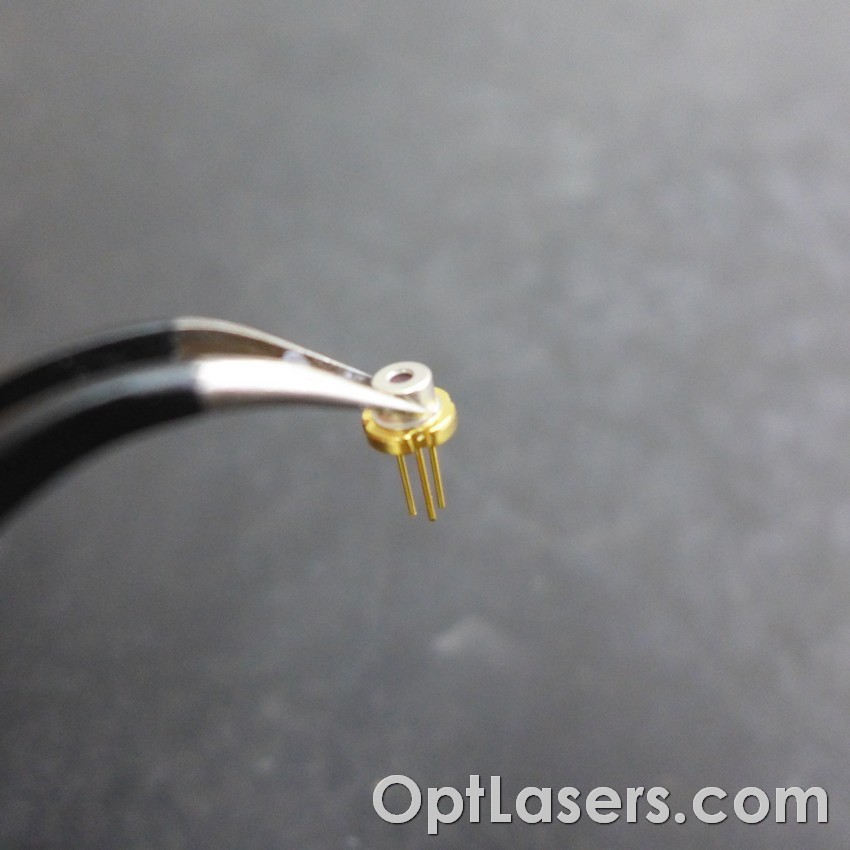 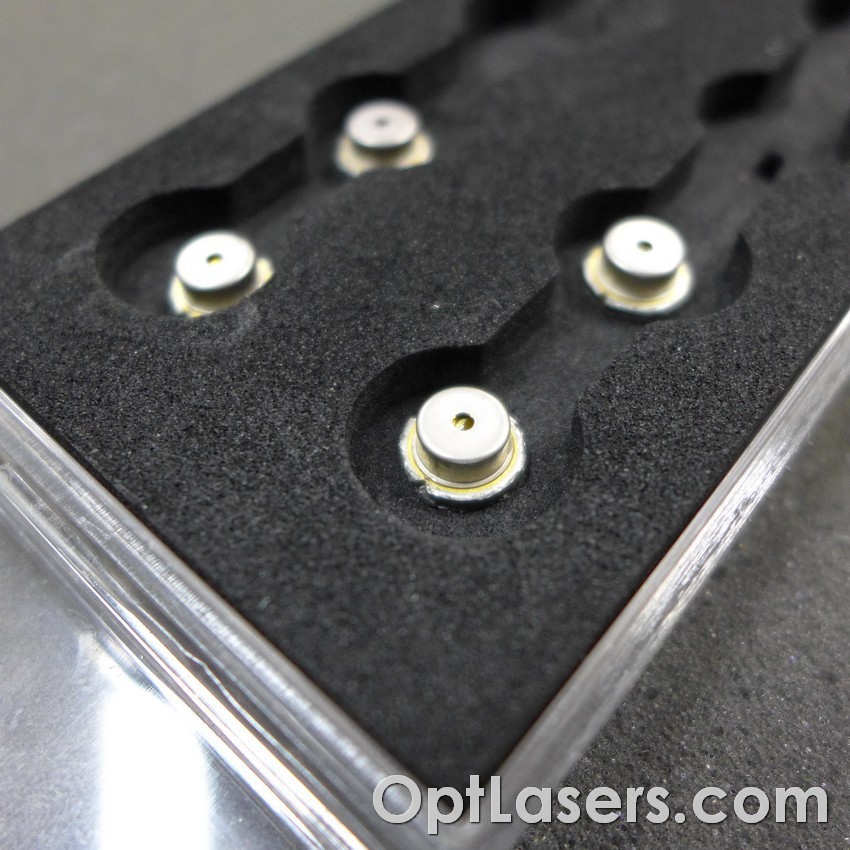 Blue lasers originally came into existence as a laboratory curiosity and were based on a Helium-Cadmium, Argon or Krypton gas. At that point ca. 1992, blue lasers were capable of lasing only 130 mW of optical power, while generating a kilowatt of energy in the form of heat. Nevertheless, the situation changed with the innovation brought upon by edge-emitting blue semiconductor laser diodes. Soon after (ca. 2000), it was evident that blue lasers could feature favourable electrical-to-optical power conversion.

The appearance of Blu-Ray technology and high-power projectors resulted in the birth of the very first major market for blue laser diodes. This accelerated the development of new and improved varieties of them. Although blue lasing is achievable with miscellaneous types of lasers (such as ion lasers, dye lasers, semiconductor laser diodes and diode-pumped solid state lasers [DPSS]), it is semiconductor blue laser diodes that are now increasingly gaining traction on the market. This appeal surge stems from the uniformly good electrical-to-optical efficiencies, small sizes, high operating temperatures and lifetimes of blue laser diodes.

In many applications, it is also advantageous to incorporate a blue laser instead of certain IR lasers like fiber lasers and CO2 lasers. While fiber lasers can practically be focused to a smaller spot size than multimode blue diode lasers because of the lower BPP (Beam Parameter Product), they require a larger cooling system. In addition, they cannot efficiently process various metals, such as, for example, Copper. Copper absorbs 5% of the incident 1.064 µm IR light and <1% of the incident 10.6 µm IR light, but 65% of the incident 450 nm blue laser beam at room temperature. On the other hand, in spite of the low price-to-power ratio of CO2 lasers, copper absorbs <1% of CO2 laser light. CO2 lasers also suffer from very poor electrical-to-optical power conversion of about 7.5%. Because of that, only <0.3 W of optical power is absorbed on Copper for a 30 W optical power CO2 Laser (which doesn’t even allow it to be processed). At the same time a 30 W optical power CO2 laser unit consumes about 400 W of electrical power, which carries a hidden cost of higher electrical bill. Compared to CO2 laser units, blue lasers offer a smaller beam waist, which allows the user to achieve higher precision and process a wider range of materials. Opt Lasers’ blue laser diode modules and laser heads are often a superior choice to alternative solutions, as they offer high reliability, lower power consumption and can process a wider range of materials, metals included. 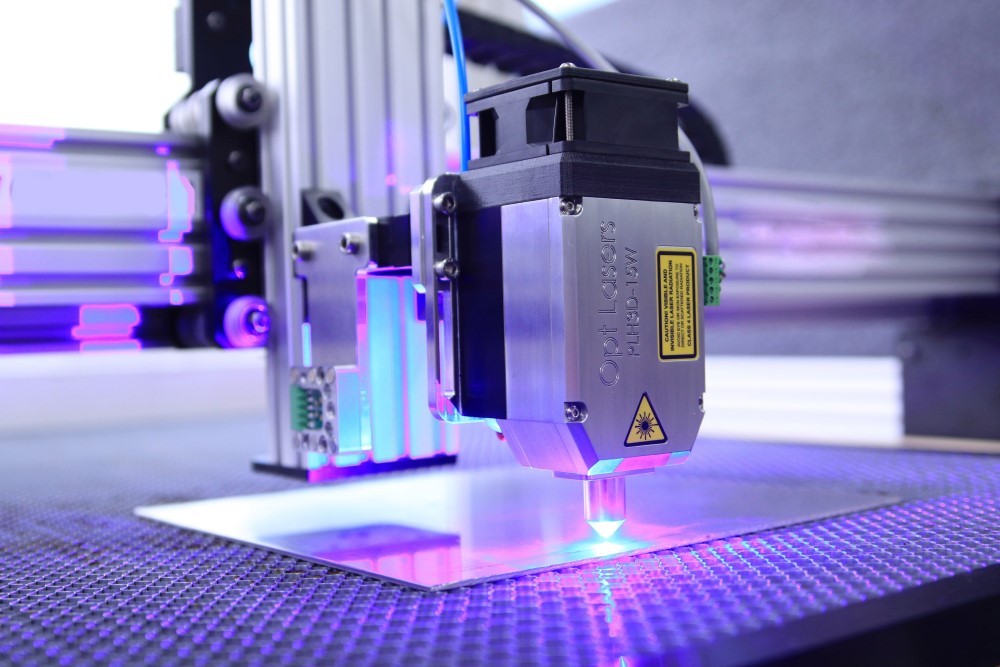 Modern blue laser diode modules are typically based on blue semiconductor laser diodes with different gain media involved. The gain medium of choice determines the properties of the light beam produced. Every blue laser diode has different characteristics. These include power, wavelength, lifetime, operating temperatures, how small it can be focused and efficiency. Other technical considerations are also important when engineering one.

For instance, InGaN laser diodes with a GaN substrate (lasing at 445 - 450 nm band), used in Opt Lasers' Laser Heads, are an immensely useful type of blue lasers. This is because of their compact size, great cost-efficiency, wide range of applications, operating temperatures as high as 85-90°C (blue laser diodes can lase at full power up to typically 60°C) and an ever-improving performance.

Gallium Nitride (GaN), binary III/V direct bandgap semiconductor with a Wurtzite crystal structure, is a great laser diode substrate as a result of its high heat capacity and thermal conductivity. The GaN-based laser diode production process might however prove a challenge because of its temperature sensitivities, hole mobilities and high bandgap of 3.42 V. Nowadays, commercially-produced blue laser diodes utilize sapphire surfaces that are coated with a GaN layer.

A single blue laser diode can currently (as of July 2021) achieve a long-lifetime power output of up to 6 W. The first example of such a diode was NUBM44 from Nichia. Recently, several more companies have developed and commercialized blue laser diodes with a power of 5+ W. Opt Lasers’ current 6 W laser diode boasts a 20 000 hours operating lifetime and is the highest power sustainably-used blue laser diode available on the market.

Blue laser diodes can have high operating temperatures without significantly affecting their lifetime. This is in part due to their high permissible junction temperatures (~130C); this allows for a narrower ridge, resulting in higher brightness and a more tightly focused beam. Moreover, the output power that can be achieved by high power blue laser diodes without overdriving them is significantly higher compared to other laser diodes. In addition to this, blue lasers can be focused to a smaller spot size than NIR and IR lasers, which results from shorter wavelengths of blue laser beams. An additional factor that allows a blue laser to be focused to a smaller spot is its beam parameter product (BPP), as the BPP of blue laser heads is 2-20 times smaller than BPPs of CO2 lasers. Finally, thanks to the boom for blue laser diodes in the Blu-Ray, automotive and projector industry, recent generations of blue laser diodes have become remarkably inexpensive and cost-efficient. As a result, blue lasers have become well-known for their robustness, reliability, cost-efficiency and high output power density.

It is worth noting that the emitter of a multimode blue laser diode has single-mode characteristics on the fast (vertical) axis and multimode characteristics on the slow (horizontal) axis. This results in a slightly asymmetric, rectangular-elliptical shape of the beam at the focus. Also, the divergence in one of the axes is several times higher than in the other. Consequently, the engineering of a blue laser system might prove a challenge as every axis needs to be analyzed and designed separately. Furthermore, as more complex systems require selecting the right laser diodes, as well as other components, our team is here to answer all your questions and can even build a custom scientific laser or industrial laser of your choice in as little as 5 weeks.


Ultimately, the biggest perk of blue lasers is that metals efficiently absorb blue laser beams. This means you have a universal laser that can process any material. On top of that, despite the lower total power, blue laser heads feature much higher power density than CO2 lasers. Furthermore, even though blue laser beams are smaller in one dimension than in gas lasers, the beam can be used much more effectively. This arises as a consequence of the high power density and high absorption rate of the blue laser beam. It is a significant advantage in case of many engraving applications. Depending on the axes’ choice, you can achieve either wider engravement or a deeper and narrower one if the outline for the engravement is rotated by 90 degrees. Blue lasers can effectively process a wide range of materials, such as Titanium, Copper, or Gold, as well as other materials like wood or leather. 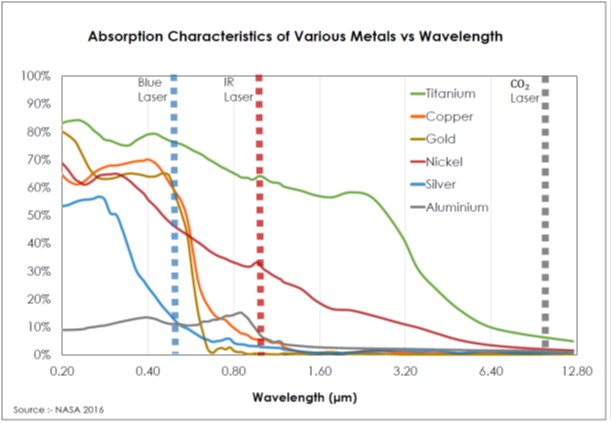 As shown in the graph above, the 445 nm (0.445 µm) blue laser beam experiences a significantly higher absorption rate for metals than Nd:YAG (1064 nm), CO2 (10600 nm) and Fiber (typically 1030 - 2050 nm) lasers. At the same time, single mode blue lasers are capable of achieving 50% higher power density. This means a blue laser can discharge between several and almost 20 times more energy at the illuminated material at the same power level compared to CO2 and Nd:YAG lasers.


The output of a blue laser beam can also be coupled into an optical fiber with an aspherical lens between them. This kind of system is called a fiber-coupled (or fiber-integrated) diode laser and it does have several advantages over alternative solutions:


Applications in Science and Industry


From the point of view of applications of blue lasers in photonics, they are profoundly convenient devices due to their practical scope of output powers and easy modulation with high-frequency control current. Applications of blue lasers include, among other things, pumping solid state lasers, quantum dots or single quantum emitters (SQEs), laser microscopy, spectroscopy, surface scanning, laser printing, sensors and pumping RBG sources (such as phosphor). For instance, using blue laser sensors is advantageous as they perform better on highly polished and gloss surfaces thanks to their shorter wavelength. By contrast, red light gets distorted by such surfaces, which results in a ‘speckle’ effect. That causes a detector to encounter elevated signal noise, which translates to lowered measurement accuracy. On the other hand, a blue laser sensor can perform extraordinarily efficiently with a notably lower amount of speckling. As such, using a blue laser results in lowered noise levels, normally by a factor of two to three as opposed to red laser sensors.

Furthermore, blue lasers can also be used in the textile industry for rapid cutting, decoration and personalization of fabrics such as cotton, polyester, viscose, felt, fleece, leather, upholstery and fiberglass fabrics, among other possibilities. What is more, blue lasers make an excellent and captivating choice for laser shows.

Medicine is also known for making an extensive use of blue lasers. The majority of titanium elements placed in a human body during surgeries is marked with blue lasers. Additionally, blue lasers are used as an illumination source in fluorescence microscopy.

On top of that, industrial applications such as heating up materials, cutting and welding benefit from good power absorption. Materials such as Titanium, Copper or Gold are able to absorb about 65-80% energy from a blue laser. This is particularly useful in the case of welding, since the low absorption of an IR laser (5%) would lead to a heightened amount of defects across the processed chunks of metal. Conversely, blue lasers are highly apt for situations where thin metals are to be swiftly and reliably joined with little to no defects. The high blue laser beam absorption rate is also capable of speeding up the assembly rate for additive manufacturing for both laser metal deposition and powder bed growth methods. While this depends on the material used, one can expect a speed increase by a factor of three to ten by adopting blue lasers. Besides that, the small focus spot size of a blue laser leads to two additional benefits. First of all, for a set optical system, the beam waist of a 450 nm beam of light is less than half that of a corresponding beam waist of a 1080 nm beam. Thus, using a blue laser beam can improve the feature scaling ability, resolution and precision of the finished product. Moreover, if the same resolution that is possible with an IR beam is applied, a blue laser can supply the same resolution, but for an area four times as large. Clearly, the outstanding potential improvement of manufacturing quality and processing speed can be highly opportune.

All in all, blue laser systems are proving very popular with a plentiful amount of tangible applications. They are robust, reliable, time-efficient and cost-effective, an example of that being our PLH3D-XT-50 laser head or PLH3D-6W-XF+ laser head with µSpot Lens Upgrade:


If you require a higher operating power, we strongly suggest looking at our PLH3D-15W Laser Head. However, if you just want to purchase your first engraving head, you may want to try our 2W laser engraving head.


If you have any questions or would like to discuss an idea for a custom laser head or a custom laser module, please feel free to reach out to us. Opt Lasers is a proud Open End Manufacturer that can turn your idea into a ready product in as little as 5 weeks.