Laser for Cutting and Engraving

Before you Start Laser Engraving and Cutting a Wood

Choosing the power of the CNC Engraving Laser - 2 W or 6 W?

When buying a blue laser for cutting and engraving on wood, often you need to decide about its power. Less powerful, 2 W laser is not only cheaper but also allows for more precision laser engraving on wood. The more expensive 6-watt laser can engrave images with large pixels, and can be used where 2-watt version can not, like cutting a hard leather or marking stainless steel or titanium. 2 W laser can work with a size of the spot of light as small as 0.1 mm, which enables wood engraving of very small details.

However, such a level of precision requires a machine that is not only very accurate but also has rigidity suitable for operating speeds that guarantee high repeatability of the trace after the head changes its direction of movement. Also, less powerful CNC laser needs more time to complete engraving, because high-resolution images are made of a larger number of thinner lines, and enlarging the spot size (pixel) means a slower movement of the head.

6 W laser head is less precise, but in exchange enables faster operation thanks to larger pixel size. For example, it can quickly produce a 30x30 cm image built from half-millimeter pixels. Effective resolution is 600x600 pixels (360 thousand points in total) while working with 0.1 mm pixel would result in a 9kk pixel image (3000x3000). This is a massive difference, especially in terms of engraving time, while the larger pixel size (and lower resolution) will be noticeable only from a distance closer than 1-2 meters.

For laser cutting wood and wood-based materials, choose the laser head with the highest available power.

Properties of the material

Cutting and engraving wood using a CNC laser depend on the type of wood, its hardness, as well as other parameters, like humidity, or texture. Materials that are easiest to cut with a laser are balsa and aviation plywood. Plywood is made of two layers of slightly harder wood, and a filler - usually balsa. Laser cutting these materials is least problematic, and the process is highly repeatable, since the wood has no knags, and has a foam-like, homogenous structure. When selecting material suitable for laser cutting or engraving, you should check its uniformity. Some variants of balsa are cheaper but may contain splinters of harder wood that are more difficult to cut with a CNC laser. Similar guidelines apply to aviation plywood.

Other types of material are solid wood, and hard plywood, for example, used in the construction of window frames. The hardness of the wood, and - in case of plywood - adhesives make such materials less than a perfect choice for cutting with LED lasers. When processing, a carbon-like deposit is created, that is black and brittle. Cutting such material too slowly causes the wood to be obscured by this deposit, which slows down the cutting even more, and the wood near laser's operating area becomes hot and dark. Therefore, it is essential to cut the hard material at high speeds, and by removing only thin layers. That makes it easy to remove small amounts of cut wood, as well as to avoid overheating, darkening, and creating unwanted deposits.

Selection of the material and surface preparation

Results of engraving heavily depend on wood type. Several parameters need to be taken into account.

Growth rings and surface uniformity. Typically, for best engraving results you need a material of homogenous color. When engraving in shades of gray, remember that darker surface absorbs more laser energy (at the same time it lowers the contrast of the image). All rings, as darker, absorb more light, therefore they get hotter, even at a reduced output power of the laser. The resulting image will be darker on such spots, which means that the engraved image will have unwanted color variations. Rings will stay visible, like an old wallpaper image covered with a low-opacity paint.

Wood-based materials. MDF boards have surfaces that offer a good rendition of the shades of gray. Such materials lack the charm of natural wood, they don't have growth rings that add unique features to engraved images, but in return, they offer a reliable and highly consistent rendering of the tones. Unfortunately, typical MDF boards are brown or dark brown so images engraved on them won't have high contrasts or bright colors. Also remember, that engraving on fibreboards and MDF involves the formation of poisonous fumes.

The hardness of the wood. Usually, engraving hardwood doesn't affect its surface in a significant manner. On the other hand, softwood - especially on darker areas of an engraved image that will be treated with a more powerful beam - will be burned to a significant depth of the material. The burn effect will be particularly visible on aviation plywood and balsa. Additionally, dark areas will be covered with a brittle, smudging deposit that can very easily soil processed surface.

Surface preparation. It is well worth the effort to finish the wood surface (e.g. with sandpaper) to make it flat, ensuring the constant distance between the laser head and processed material. This is one of the fundamental requirements determining the quality of resulting shades of gray. Uneven surface not only will cause local variations of the focus of the beam and in turn the density of energy used to burn in the image, but also the changes in the size of the spot of light, which translates to resulting pixel size. This means that you cannot obtain uniform, repeatable shades of gray on an uneven material.

When laser cutting wood and wood-based materials, use the highest available power of the laser engraver, and by varying the speed of the movement you can control the outcome, for example, the intensity of the burn at the cut edge, or even burning through the processed layer. To achieve a clean edge of the cut, you should work in layers, i.e. after the first laser cutting cycle, the head should be lowered (in Z-axis) and start another cycle. These operations should be performed repeatedly, depending on the thickness of the material. This way, we can ensure that the laser beam is focused on the layer that's being cut and not the top surface.

Cutting wood and other materials producing large amounts of vapors require the quick removal of unwanted gases. Smoke, that consists of microparticles, optically impedes laser beam. If the cutting machine has an insufficient supply of clean air to the laser, some parts of the material may not be cut completely, and, in case of engraving, the resulting image may have inconsistent shades.

Even small images can consist of a significant number of pixels which takes a long time to laser engrave. That's why users are trying to speed up that process as much as possible. As it turns out, however, the limit comes not from the power of the CNC laser engraver, but the speed of the machine or 3D printer. For slower models a good solution is a technique called a diagonal engraving, that is, moving the engraving laser head across the working area in vertical and horizontal direction simultaneously. When both motors of the machine (for X and Y axes) are working together, the net speed of the laser engraving is higher than in one axis alone. You can use this method under the condition that the controller of the machine allows simultaneous movement in both axes.

It's well worth the effort to take a look at the machine's stability and durability. Despite low power of the laser, engraving small details or cutting out parts that are just a few millimeters across, forces quick direction changes of the laser head. Various CNC machine types can reach various levels of acceleration, however, none can instantly reach the working speed. This means that using lower power of the laser together with lower speed ensures correct rendering of shades even on fine details, and the speed of the head and its rate of acceleration won't affect the outcome.

The best-operating conditions can be achieved when at maximum laser power you can move the head at such speed, that engraved line corresponds to black color. This indicates the ability to work at high speed, and at the same time to obtain any shade of gray thanks to modulation of laser power with appropriate G-code. Some materials, however, require two or three engraving passes of the same detail at lowered power. This technique isn't only used to avoid burning the layer close to the spot of the laser, but also to obtain darkest shades possible. This is especially useful when processing softer wood-based materials, such as balsa or aviation plywood. 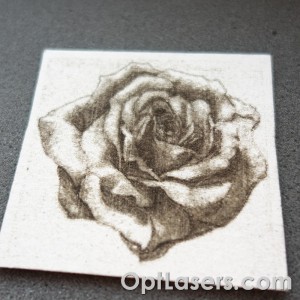 Unfortunately, the large variety of material makes it impossible to create a universal table of processing parameters, like speed or laser power, that would fit given conditions. Therefore, it is essential for the user to perform a series of tests on the selected surface, and set up the machine based on obtained results. This necessity results from the fact that the operating parameters depend on such properties, as the temperature of the wood, humidity, storage conditions, density, color, hardness, the density of growth rings, or surface finish.

A very interesting technique based on focusing laser beam from larger than a usual distance between the head and the surface, for example, 15 cm. Such distance causes the spot of the laser to reach a size of 0.5 mm - 1 mm, and after proper focusing, it will have a square shape. This way we get large pixels that are very useful for fast laser engraving of large images.

Fine-tuning a Laser Spot for Laser Engraving in Wood

To achieve the high engraving speed you need to focus a laser beam properly. For that, you can employ one of two basic methods. The first one allows us to obtain the smallest possible spot size, and in turn - the highest power density. A very small surface of the spot ensures that the density - calculated as the power divided by the surface - reaches the highest level, allowing for the fastest working speed. The calibration should begin by engraving several lines at various head distances and in both axes of machine movement. Then select the settings that resulted in thinnest lines of the grid. This method has a disadvantage - the spot won't be square, which results from the properties of the optics of the laser head that renders light of laser diode emitter on the surface of the wood. The rounded shape of the spot is not optimal for engraving pixel-based images.

The software available for CNC machines can be equipped with a feature of selecting spot type, as well as laser engraving method, e.g. from left to right, top to bottom, or diagonally. Our experience shows that the best results can be achieved in diagonal mode. This ensures the most consistent shades. At the edges of the spot, the power density is a bit lower than at the center, so in the diagonal method, the traces left by laser overlap slightly, preventing the formation of distinct edges of image lines, as well as gaps between them.

In another, already mentioned the method of focusing the beam, we try to obtain a square laser spot that corresponds to pixel size. To use this technique, first, engrave small squares at various distances of the laser head, and select the settings that resulted in squares with sides of equal thickness. This way the CNC laser will engrave lines of constant thickness, regardless of the direction of the movement (horizontal or vertical).

Laser engraving speed achieved in the latter method will be somewhat slower than in the diagonal technique, however, it results in a different visual effect. Although each of the described methods has its pros and cons, none can be regarded as better or worse than the other. The user should independently test each technique and decide, which suits his needs best.

Safe work with the CNC laser