One of the important applications for Opt Lasers engraving laser heads is the ability to use them to mark, decorate, or age wood. In Poland alone, there are about 13,000 registered carpenter's workshops and woodworking companies (as of May 2018). What's more, woodworking is now becoming increasingly automated and the increase in the number of machines in the industry is directly reflected in the increased demand for engraving laser heads. There is a clear tendency to optimize pattern engraving by simultaneous operation of multiple laser heads on a single CNC machine, which speeds up the process and the possibility of using a compact engraving head and mounting it on an existing machine allows to create new possibilities without having to buy a new CO2 plotter, for example. 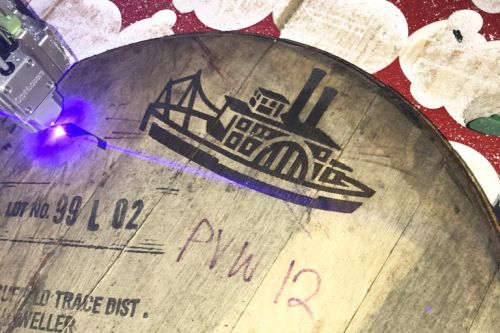 Laser heads can be used in the textile industry to cut, decorate and personalize fabrics such as cotton, polyester, viscose, naphthalene, felt, fleece, leather, upholstery, glass fiber fabrics, and other technical fabrics. Opt Lasers cooperates with the world market leaders in the manufacture of production machinery. Innovative materials commissioned by a French fashion designer were first shown in 2018 at a show in Milan. The materials were made on a machine equipped with 12 of 6W laser cutting heads. According to an independent market analysis unit of Poland, in 2017, about 8,900 business entities were operating in Poland in the production of textile products, as well as about 26,700 companies producing clothing and almost 6,000 business entities producing leather and footwear. The number of companies operating in the textile industry is growing by about 5% each year. Due to the growing demand for fast production of clothes, multi-head machines.

The laser head can also be used to produce spatial building models. Making physical models of designed objects is a popular form of presentation of the project among architects because it shows exactly every detail of the building. According to Polish business portals and the Statistical Office, about 16 500 architectural offices operate in Poland in 2018. Moreover, according to the Office of Competition and Consumer Protection, in the years 2014-2017, the number of active architects increased by 40%.

With the help of laser engraving, it is possible to mark metals cheaply and permanently with a laser, which can be used in the production of steel structures. Structural components require markings related to the date and place of manufacture, the detailed designation, and certain operating conditions. According to business portals, in 2017, the production of steel structures in Poland was estimated at 790,000 tonnes, which placed Poland in the position of one of the main producers in Europe. According to the data of the statistical office, about 10 000 steel structure manufacturers operate in Poland (as of 2018). As the power of the laser heads increases, the possibilities of marking and engraving with a blue laser will increase. The 6W laser heads are capable of marking stainless steel and titanium. The development of multi-laser head technology will provide solutions for the engraving and ablation of other metals such as carbon steel, copper, brass, and aluminum.

Numerous functions of laser heads arouse interest in this sector. Laser ablation, i.e. the process of evaporation (removal) of material from the surface of the solid allows for precise removal of a small amount of material. The high absorption coefficient of blue light with a wavelength of 440 - 450nm allows the use of a small light source such as the laser head. The measuring equipment is often very complex and access to the sample of the material being tested is difficult, which makes the compactness of the blue laser heads a great advantage for their integration into research systems. Research is also carried out in the processes of plant breeding automation and in the process of a modern method of analysis of agricultural raw materials and the use of a blue laser to kill small pests and weed seeds. According to the data of the Statistical Office (2018), there are 18 public technical universities and 5 non-public ones in Poland, while there are about 600 schools worldwide educating future engineers (Opt Lasers currently cooperates with many scientific institutions, for example, Nagoya University, The University of Oklahoma, Stanford University, The University of Sidney, University of California, University of Otago, Universidade de Sao Paulo, Uni Jena, and many others.

Titanium is a lightweight and durable metal and can also be used in medicine. The human body treats this metal neutrally, which allows it to be used for the production of skull implants, bones, and stabilizers. Each part is marked to contain the relevant data. The ability to record the date of implantation directly on the element facilitates diagnosis in case of complications and acceptance of transplants. Thanks to the compactness of the blue laser engraving, the physician can mark every single component needed with a small device. Also, using a 6W laser head, titanium is marked (changes color) rather than engraved, which does not affect its structure and strength, which is very important when marking implants.