State of the Market

CNC lasers have an enormous range of applications as engraving lasers and cutting lasers, which translates to a wide range of potential target groups. The analysis of the target market can be presented structurally, divided into direct laser head recipients, as well as specific industries, where an introduction of the blue diode technology for cutting and engraving can reap substantial benefits.

First of all, it is worth pointing out that a high-power diode laser can be used for laser processing. It is a relatively modern processing method that, thanks to a reduced size of the spot being processed, can yield enhanced precision and quality compared to classical processing methods. The basic difference lies in the cutting medium used, which, in case of laser cutting, is a condensed high-power optical beam. Laser devices can be installed in all kinds of processing machines (including lathes, milling machines, machining centers, plotters, 3D printers, and various types of appliances and CNC machines).

It is estimated that around 60% of the currently used CNC machines can be equipped with a CNC laser module for laser cutting and engraving. With the advent of new processing tools, as well as structural and technological innovations, the state-of-the-art machine models are quite compact and require less space compared to conventional machines. Reducing the maintenance costs of material processing machines, while choosing a laser head that is compact in size, is a key challenge for manufacturers who want to boost company efficiency. Interestingly, laser heads based on blue laser diodes boast both compact dimensions and a favourable, competitive price proving themselves very popular among CNC machine manufacturers and users. Laser heads are also favored by the manufacturers of 3D printers due to their high electrical efficiency, compatibility with available software, compact size and high power emission. 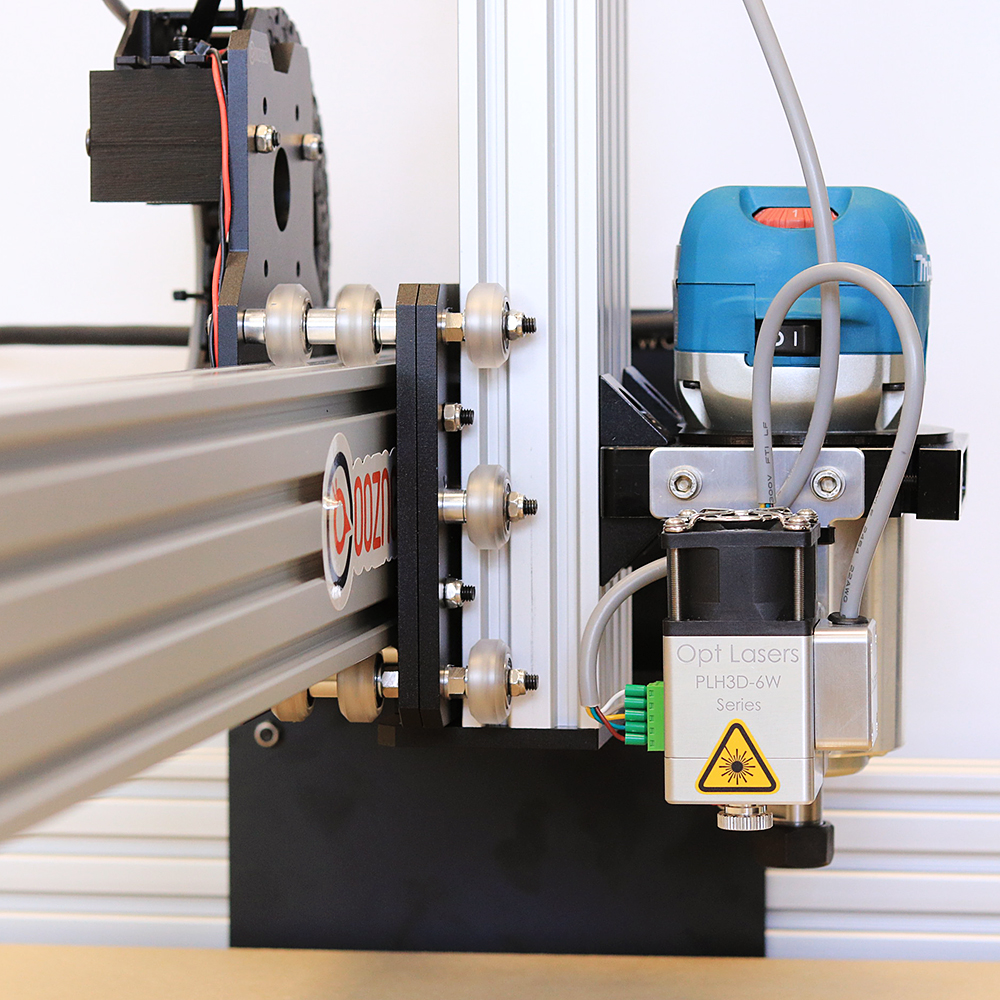 In 2015, 220 000 units of 3D printers worth $1.6 billion were sold around the globe. By 2020, up to 8 million units of these devices were forecast to find their users (data taken from Deloitte's research report "Development of the 3D printers market in Poland and worldwide", November 2016). 3D printers are devices that are technologically adapted to the use of laser technology as the extruder head can simply be replaced by a laser head, while the entire cutting process takes place using the device's print bed. A considerable advantage of using compact CNC lasers is the ease of assembly on a 3D printer as no additional cooling of the laser head is required, nor is there any need for high-strength structures. Thanks to the laser processing technology it will be possible for you to cut and engrave in a diverse range of materials, including those used directly for 3D printing. Furthermore, the implementation of the blue diodes technology makes it possible to engrave on bright surfaces at high speed and with a 0.1 mm precision. In addition to the standard functionalities of a laser head, a small laser spot will allow for the exposure of laminate PCB circuit board plates covered with a photosensitive layer, which can facilitate rapid prototyping (and thus enable the realization of the basic functionality of 3D printers). 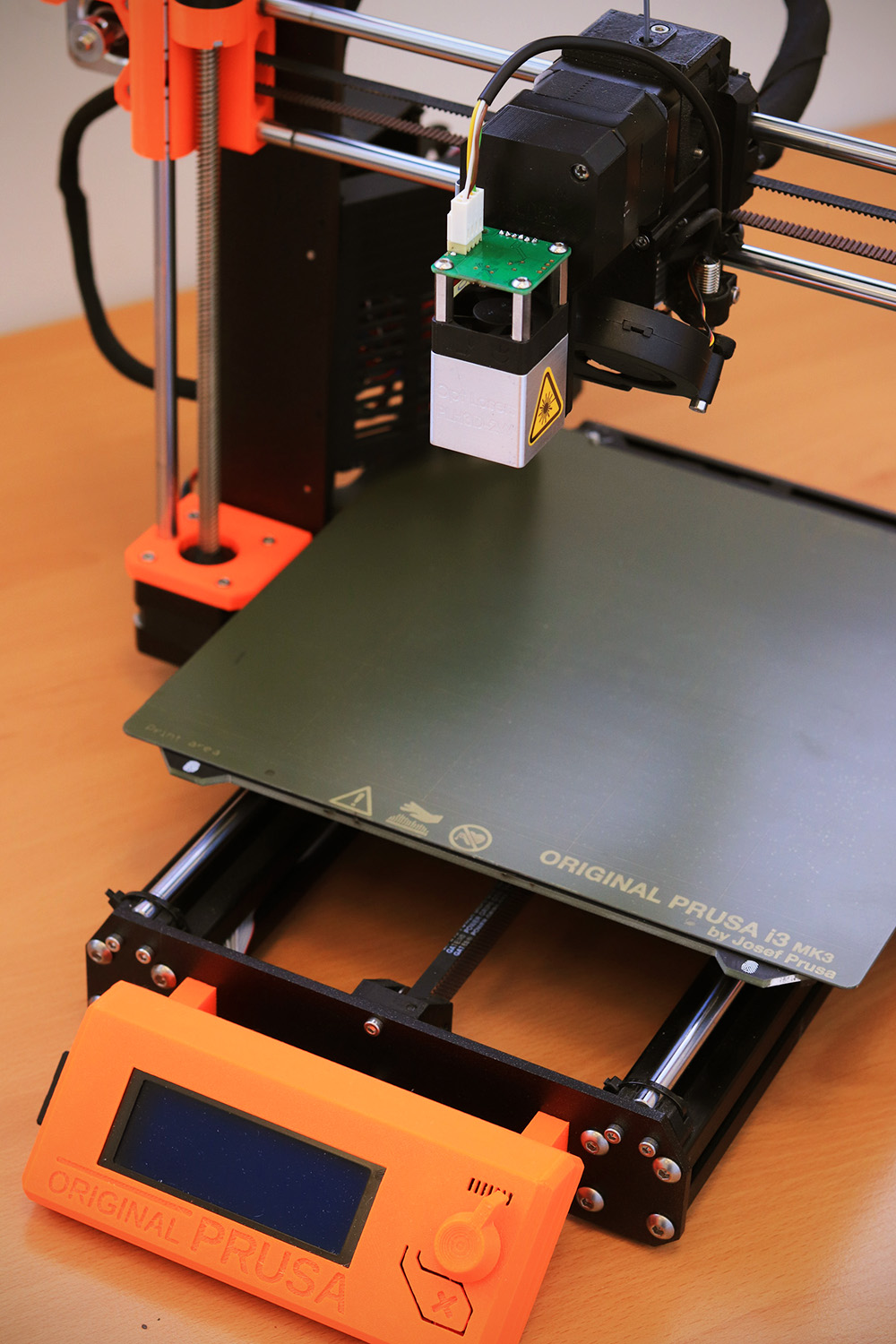 The market reveals a trend towards the broadening adoption of CNC lasers in an increasingly wide range of fields. Moreover, a great deal of novel compact CNC machines such as X-Carve, Workbee Shapeoko and Stepcraft have been developed in recent years. Such machines offer a lightweight construction and a substantial versatility that comes at a relatively low price, and as such are very popular for processing wood and machinery among small and medium-sized enterprises. The advent of compact CNC lasers in the form of laser engraving heads allows us to further expand the capabilities of these machines. As the market awareness of the possibility to add a laser engraver to any CNC machine grows constantly, so does the popularity of the CNC lasers. CNC lasers are now offered by Starcraft, Snapmaker, as well as the CNC Shark. Competition from CNC machine manufacturers will eventually force them to expand the capabilities of their products by adding a laser to their standardized equipment. Opt Lasers offer suitable matching high-quality solutions, as well as highly-satisfying service and support.